What are ways of comparing soil moisture dynamics of rain gardens?

Sandra Albro and I completed installation of monitoring equipment in three experimental parcels and one control parcel in Gary’s Aetna neighborhood on April 19, 2016.  The first month’s monitoring data are now available.  Estimation of depth-weighted soil moisture (m3/m3) is the simplest way to visually compare the dynamics of soil moisture (Figure 1).  The control parcel has the highest water content followed by experimental parcels 2, 1, and 3.  Our weather station in Aetna is temporarily offline, but we can obtain precipitation data from the U.S. Weather Station in Gary (Figure 2).  In general, the spikes in soil moisture correspond to storm events.  Because all of the rain gardens have identical soil mixtures, their variation in water content must reflect differences in local catchment area and the effects of neighboring tree cover.  With predominantly sandy soils, it is not too surprising to observe the rapid decline in soil moisture following precipitation events, but the control parcel (lacking a rain garden) does appear to have a slower rate of decline in soil moisture while maintaining a higher water content.  To move beyond a qualitative comparison of these changes, we will need a quantitative method to find local minima and maxima in a soil moisture time series and determine the slope of soil moisture decline from one local maximum to the next local minimum.  We would also need the method to find the increment of soil moisture from a local minimum to the next local maximum.  Documenting this method and some preliminary results is the purpose of this blog entry.

Finding local extrema (maximum and minimum values) in a time series is the first step in analysis.  Although it would be possible to identify these values visually, a better way is to find a quantitative, rule-based method.  Although I could find no such method in available R libraries, I did find relatively simple algorithm (findpeaks) by Timothée Poisot that uses the diff function in R (https://rtricks.wordpress.com/2009/05/03/an-algorithm-to-find-local-extrema-in-a-vector/).  This algorithm requires specification of a parameter for the analysis interval (with a value between 1 and the length of the entire time series).  I tried a range of values from 0.3% to 25% of the data range and did not find a reasonable match to the observed major spikes and troughs.  Lower parameter values performed better, but the noisy time series tend to produce too many local extrema.  The time series in Figure 1 consist of data reported at 5-minute intervals and thus consists of a mixture signals of process operating at different time scales.

A useful algorithm for smoothing noisy time series is the Loess function in R.  It is an algorithm for fitting local polynomial regressions.  The loess function in R also has a parameter for the size of the sampling interval of the time series.  To smooth out diurnal variations, I set the value of this parameter to a value that equaled the number of samplings per day (288 at 5-minute intervals).  The span parameter for the loess function is thus the ratio of the number of samples per day to the number of days in the time series being analyzed.  With the loess fitted time series, the identification of extrema by the findpeaks function was far less sensitive to values of the sampling interval, and the location of peaks and troughs varied asymptotically with decreasing size of the sampling interval.  I programmed this method in an R script (Slope_Calc.R), and the method correctly identified nearly all of the extrema in the time series for weighted average soil moisture data from the Gary experimental parcel 1 (Figure 3).

Although the method does correctly estimate the timing of the local maxima and minima, the smoothing functions do have some problems.  On May 13, for example the slope is positive because there was a short interval in which the analysis failed on a smoothing artifact.  The amplitude of the local maximum is also lower than the observed data.  However, the amplitude better matches the loess fitted time series.  Overall, it appears that the method does capture the basic characteristics of the soil moisture dynamics and, thus, appears to be a reasonable method for comparing experimental parcels and controls.  Figure 5 shows an interesting relationship between the magnitude of the soil moisture increment and slope of the subsequent decline in soil moisture.

The loss of soil moisture from a rain garden or control plot is a complex function of processes operating at different time scales.  Evapotranspiration and deep infiltration are likely dominant processes in the Aetna neighborhood.  These two process depend on additional factors such as soil temperature, atmospheric relative humidity, vegetation cover and type, and soil porosity.  The results in Figure 5 suggest that it might be possible to find patterns associated with various driving variables in different parts of the time series.  Additionally, the profile of these responses may be useful in comparing water retention by experimental and control plots in different seasons.

How do rain gardens process runoff and rainfall?

Through the Vacant to Vibrant Project, we have been able to obtain preliminary performance data for three rain gardens in Cleveland.  The data are from a rain garden in the Cleveland Botanical Garden and two Vacant to Vibrant parcels in Cleveland’s Woodland Hills neighborhood.  The remote monitoring station at 10607 Hulda Avenue (figure 1) consisted of an Onset RX3000 series data logger with cellular communication, soil moisture probes (Onset Part Number S-SMC) deployed at 3 cm, 10 cm, and 20 cm and a soil temperature probe (Onset Part Number S-TMB) deployed at 3 cm in the primary rain garden.   At the other two experimental parcels (10611 Crestwood Avenue and 10411 Shale Avenue), we installed buried Onset H21 data logger and deployed a soil temperature probe at 3 cm and soil moisture probes at 3 cm, 10 cm, and 20 cm in the primary rain garden.  The H21 data logger in the Shale experimental parcel failed due to water damage.  Monitoring stations in the Hulda and Crestwood parcels, however, provided continuous data logging from July 7, 2015 through 2016.  In June 2014, we installed the H21 data logger and three soil moisture and one soil temperature sensors (using the same design as with the Shale and Crestwood parcels) in the experimental rain garden of the Cleveland Botanical Garden.   We have been monitoring the Cleveland Botanical Garden rain garden continuously since June 2014 and have used it for various experimental and calibration studies.

We calibrated all soil moisture sensors prior to deployment.  Although we detected bias in the sets of sensors used for each of the rain gardens, the biases were not consistent across types of calibration media (air, water, and damp potting soil mixture).  Therefore, we did not try to analyze gradients of soil moisture within each of the rain gardens.  Rather, we compared patterns of change in soil moisture at each of the sampled depths (3 cm in Figure 4, 10 cm in Figure 5, and 20 cm in Figure 6).   The patterns are similar to those for the weighted average soil moisture measurements (Figure 1), and they reflect the patterns of precipitation (Figure 7) observed at various weather stations.  In general, however, the rain garden at the Cleveland Botanical Garden seemed to have much higher rainfall than measured at the other two weather stations; indicating that the higher water content of the rain garden at the Cleveland Botanical Garden is the result of lower soil temperature and higher precipitation.  Figure 8 shows the relationship between rainfall measured at the Cleveland Botanical Garden and at the KCLE station of the U.S. Weather service.  These two locations are 13.5 miles apart and the residual variability between the two stations reflects the regional variation in intensity of rainfall events. 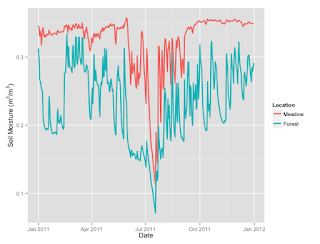 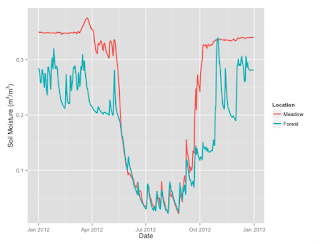